NYU alum, Jenna Bosco, grew tired of her agency sending her on auditions where she was forced to fit into a box. The multi-ethnic actress decided to go out on her own and create a role tailor made for her.

“New Heights” is a webseries set to premiere on YouTube on Thursday, August 28th. It will follow Elle, a character loosely based on Bosco and her experience living in Crown Heights, Brooklyn. The project which was written and produced by Bosco came to fruition solely due to her drive, hard work, and determination.

Lex Loves Couture had the opportunity to talk to Jenna about “New Heights” and of course fashion!

Lex Loves Couture: Your personal style is very definitive. Where do you draw your inspiration from?

Jenna Bosco: I’m inspired by art, bright colors, and nature. In fashion I’m always drawn to big, bold patterns and prints. I love pieces that make a statement and I have very eclectic taste. I think that’s why I’m an actress, because I like to switch up my wardrobe so often. In my closet I have all of these crazy clothing pieces from different eras and different places, and very few basics. It’s kind of a problem when I try to put an outfit together! It’s like so much costume and so little practicality. I just love expressing myself through loud and funky clothing – it truly makes me feel free, like I’m marching to the beat of my own drum. 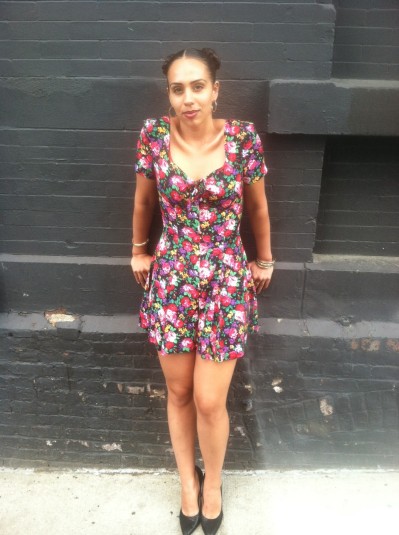 LLC: What is your fashion mantra? The thing you tell yourself when you are picking out your next outfit.

LLC: Who are your style icons?

JB: My true style icon (besides my fabulous Grandmother) is Ella Fitzgerald. Not only because she has the most magical voice I’ve ever heard. I’ve always been attracted to her effortless panache. I just love how graceful and confident she is – and I think that is what style is all about. Being comfortable in your genuine skin. On a completely different note, I also love Josephine Baker (look at photos of her and I think it’s obvious why!) The costumes, the hair, and the accessories are all just amazing. My contemporary style icons are Solange, Cate Blanchett, Chloe Sevigny, Sarah Jessica Parker, and Rihanna. All women who are bold, true to themselves, and take risks.

LLC: You have an exciting new project, “New Heights”, premiering on YouTube Thursday, August 28th. What made you decide to go out on your own and make it happen?

JB: I was with an agency and I was auditioning for all these roles and never booking anything. It was frustrating more so because the roles I was being sent out for I never felt quite right for. Because I’m of mixed background, I never feel like I’m enough of anything. Not black enough for the black roles, I can’t be Latina because I don’t speak Spanish, too ethnic for the white roles…It was like I was always being shoved in a box that I didn’t quite fit in. I decided I had to make my own work if I was going to be an actress. Showbiz is tough because you’re always looking for work. So I finally told myself I was gonna tell a story I felt passionate about telling. If I didn’t, who would tell it? It’s much harder work, but it’s much more rewarding.

LLC: It certainly appeared to be a labor of love getting this project off the ground. What was the process required to get production going?

JB: I learned so much during the production process. I had no idea how to be a producer or a production manager, but there was nobody else to do the work and I had a screenplay I had to film, so I had to figure out how to do it. I wore a lot of hats during the filming process, which made it stressful at times, but it’s also taught me so much. Now that the series is being released, I’m the marketing manager and I’m coming up with all these creative marketing strategies. It’s all pretty cool because I feel like I’m teaching myself how to do things but doing them. It’s validating. It also helps that I have a boyfriend who works in television and loves film – we banded together, brainstormed, and made the project happen. He’s done so much for the project and I really couldn’t have done it without his vision. Yay for friends!

LLC: What is the premise of “New Heights”? Is it closely related to your personal Brooklyn experience?

JB: “New Heights” follows Elle, a young and mixed-race actress who moves to Crown Heights, Brooklyn after graduating from a prestigious university. Through the various characters she meets, Elle finds herself confronting the social constructs that underlie our world. Elle finds herself not only at the beginning of an acting career, but also at the beginning of self-discovery in a fractured world. The series is very closely related to my experience in the world, and in Crown Heights, Brooklyn specifically. Some of the characters and plot lines are inspired by my real experiences and observations living in the neighborhood.

LLC: How did fashion play a factor in the costume design of the series? You appeared to capture the essence of the 20-something Brooklynite.

JB: We didn’t have a budget for a costume designer, or any costumes for that matter, so I was the costume designer, and I sort of had to make it work. Elle is wearing outfits from my wardrobe, but it works out because Elle is a character that is close to who I am. For the other actors, I would instruct and consult with them about wardrobe, and based on what they personally owned, they brought in some options on shooting day and we “made it work.” For the record, if we do a Season 2, I definitely want to have a costume designer!

LLC: If everything went your way, what would your ultimate goal for the series be?

JB: My ultimate goal for the series would be to gain a following of fans who are interested in the story. My other ultimate goal would be to find producers for the second season of New Heights (and maybe a couple other projects). I definitely want to keep writing stories with a diverse set of characters. It would also be great to get acting and writing jobs out of this!

Check out the Season 1 trailer for the exciting new web series “New Heights” below and do not miss the premiere tomorrow August 28th!