This season I took it easy. I didn’t run from show to show like a mad woman. If something didn’t feel feasible I skipped it. If I simply did not feel like going, I didn’t.

September is always interesting because without fail fashion week falls on my birthday. Almost every season, I run around from to show to show either not celebrating or saving the celebrations for later in the evening.

This birthday was not significantly important, but I decided early on that I’m “reclaiming my time” as the fabulous Maxine Waters would say. Fashion week occurs twice per year in New York. There is no reason not to say, “No fashion, Alexa today is about you”. So that’s what I did and it was perfect.

When you’re first starting out it feels like you need to be everywhere and see everything. While presence is important, being at two or three shows a day has the same effect as going to five or six. I’ve done both and I can tell you that I didn’t feel any less accomplished when I went to fewer shows…just less exhausted.

This was another great season and I wouldn’t change a thing! For my looks I tried to continue on the path of pushing past my comfort zone. I went for bold looks that would stand out. Check them out below! 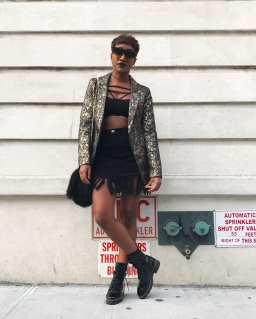 What do YOU think of my looks?